STAT COUNTER. yeah, your being counted. consider yourself lucky! lol

Ruben's mother, Rukiya, died of a heart condition shortly after Ruben's birth at the Lowry Park Zoo in Tampa, Fla. Attempts to integrate Ruben into other troops failed before he was brought to Oklahoma City in July. 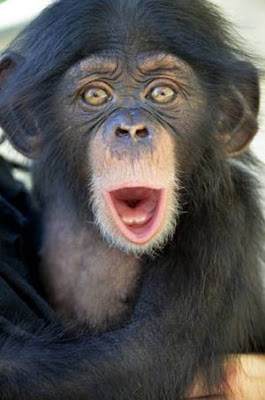 By Matt Patterson | Published: September 17, 2012
Ruben the chimpanzee's first months in this world have been anything but easy.
His mother, Rukiya, died of a heart condition shortly after his birth at the Lowry Park Zoo in Tampa, Fla. His biological father was deemed too intense for him. And another female chimp at Busch Gardens in Florida also was too much for the pint-size primate.
“Our two females liked him but none of them picked him up, neither of them were that interested,” Lowry Park curator Lee Ann Rottman said. “His father wanted to play all the time and Ruben just wasn't ready for that.”
Rottman said one of the saddest aspects of the early part of Ruben's life was that his mother had already been a surrogate to another baby chimp.
“We had very high hopes for her as a mom,” Rottman said.
But the now 8-month-old chimp looks to have found a home at the Oklahoma City Zoo. Ruben arrived along with three handlers in July on a private jet donated by a supporter of the Lowry Park Zoo.
Ruben has found a surrogate mother in Kito, who has never had any offspring of her own. Ruben was introduced to Kito and Zoe and the rest of their troop after three days of monitoring by zoo staff.
Kito was chosen for the role as surrogate mom because of her success playing the role of surrogate to Siri, another chimpanzee at the zoo. Siri was brought to the Oklahoma City Zoo after her mother's breast milk was found to be nutritionally deficient and could not meet the growing chimp's needs.
“We chose Kito because she has the patience of a saint,” Oklahoma City Zoo curator Laura Bottaro said. “We knew this from how she handled Siri.”
Kito and Ruben were a natural fit, Bottaro said. But Ruben had to be cared for around the clock after his arrival. Baby chimps need to be held at all times, Bottaro said. Staffers at the zoo wore special shirts designed to mimic the hair of chimpanzees.
“The transition from humans can be uncomfortable for the infant because they're not sure they fit in,” Bottaro said. “Once they fit in, they're in.”
No guarantee
Curator Robin Newby said the hierarchies of chimpanzee troops can be complex. And even though Kito had been a successful surrogate before, there was no guarantee it would work again.
“It is very strict and complex,” Newby said. “They feel the need to keep individuals in check at all times. There's a lot of demonstrations either vocally or physically to accomplish that.”

Kito showed off her experience rearing infants almost immediately. When it was bedtime, her technique to keep Ruben near her was the same she had used for Siri. “Her strategy is to gather all of the nice bedding material each night, things like hay and wood wool, which is shredded wood,” Bottaro said. “She puts that stuff around her. She never forced him. She waited for him to come to her. She was saying to him, ‘Unless you want to sleep on a hard floor, you have to be in my vicinity.'”
With the addition of Ruben, the zoo now has nine chimpanzees in two troops. Ruben even bonded quickly with Mwami, the dominant male in his troop. Mwami is protective of Ruben. They're not quite father and son, but more like nephew and fun uncle. Mwami often pats Ruben's head and incites him into play by doing a dance in front of him.
“The one concern I had is this infant was a male and the other two we've had to pair with surrogates were females,” Bottaro said.
“Sometimes in the wild, if the dominant male is not the biological father, that can be a problem. But that didn't happen.”
A ‘true boy'
Even as Ruben clings to the security of adults, he does venture off on his own. Rottman said at Lowry Park, Ruben was rambunctious and a “true boy” who loved to eat.
He has continued on that path in Oklahoma City.
“For a youngster at his age he's very independent,” Newby said. “He'll go back to his surrogate mom for a little check-in and then he's off playing with the dominant male.”
Ruben will remain out of public view until he is fully integrated with all of the zoo's chimps. But that day is coming soon, Bottaro said. And when it does it will be the final step in his journey that took him from Florida to central Oklahoma. It also highlights the cooperation between zoos. It was painful for Rottman to give up Ruben, but she knew it was for the best.
“The staff here truly loved him,” Rottman said. “But we knew this was the right decision and we had so much faith in the staff at Oklahoma City because they've done this before. It is a truly wonderful situation he's in now and we couldn't be more pleased and thankful for that.”

LINKS THAT MAY INTEREST YOU